Bus from Penang to KL Sentral

If you want to travel by bus from Penang to Kl Sentral in Kuala Lumpur to get to Kuala Lumpur Airport (KUL), there are a number of bus companies that will stop off at KL Sentral so you can easily connect with the high-speed train or cheaper buses leaving for the main international terminal KLIA or KLIA2 where most of the low cost airlines operate from.

Bus from KOMTAR to KL Sentral

Your best option is to leave Penang Island from just under the KOMTAR building in the centre of George Town.

This is the easiest departure point to get to and is within walking distance to most accommodation in the old part of the city, or you can take a short RapidPenang bus ride to the bus terminal under KOMTAR

There a a few bus companies that start the journey from here, including Billion Stars and New Asian Travel, with departures both during the day and at night.

Tickets for the bus start at around 33RM and the trip should take between 4 to 5 hours depending on traffic, with a short toilet break where you will be able to buy drinks and snacks.

Please Note - If you want to travel from Penang to KLIA / KLIA2 (Kuala Lumpur Airport - KUL), there are now direct buses from Penang Sentral in Butterworth to KL Airport.

Many places in town will sell you tickets for buses to Kuala Lumpur, just make sure they stop off at KL Sentral if that's where you want to go to.

You can also buy your tickets from the agents offices close to the local bus terminal under KOMTAR.

There is really no need to travel all the way out to the Sungai Nibong bus terminal, as all the buses that depart from KOMTAR will stop off here to pick up more passengers.

If you happen to be staying in the Bayan Lepas area, then it is close by, otherwise you are better off catching the bus from KOMTAR.

There are a few bus companies, such as Nice Bus, that only leave from Sungai Nibong. So if you really want to use one of these buses, it means that you will have to catch a local island bus or taxi out to the bus station.

Buses will usually drop you off in front of the main entrance to the large KL Sentral complex.

If you are heading off to the airport, you can choose to take the fast KLIA Ekpres Train for 55 RM (which takes just under 30 minutes), or a much cheaper and slower bus (one hour ++) for around 10RM.

Once inside KL Sentral, just follow the signs to find the KLIA Express Train ticket counters or to catch one of the buses to the airport (which leave from downstairs, under the building). 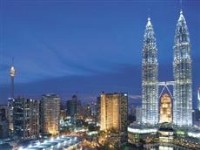 Alternatively, you can catch the train from Butterworth to KL Sentral.

Click here to see our Penang to KL Train page >