Travelling by bus to Penang Island can be done from just about anywhere on Peninsular Malaysia, with hundreds of buses a day coming from all destinations to either Butterworth bus station on the mainland (now Penang Sentral), or KOMTAR and Sungai Nibong bus station on Penang Island.

If you have the choice and are planning to arrive well before midnight to catch the last Penang Island ferry, then Butterworth bus station is my first choice of arrival point in Penang - Read on to find out why?

To Book Bus Tickets Online to / from Penang click here >

Bus Routes to / from Penang or Butterworth

Buses to Thailand from Penang

For buses from Singapore, Hat Yai in Thailand and all destinations within Peninsular Malaysia, you can now book your bus tickets online.

As a tourist there is no reason to get a bus to Penang to this bus station on Penang Island, because it is quite a long way from the old part of Georgetown, where most visitors will be heading to, to find accommodation.

If you do end up here, you will have to go out onto the main road and catch a local island bus to KOMTAR, then on towards the Jetty to find a hotel, or pay for an expensive taxi, which will probably cost just as much as the fare you just paid for your bus to Penang!

There are a number of long distance buses that depart from KOMTAR, but less and less now arrive here and most now terminate at Sungai Nibong bus terminal.

KOMTAR is just on the edge of the old part of the city, where you can then catch a bus or walk along Penang Road for about 10 minutes, where you will find many of the upmarket hotels, as well as a few budget hotels.

Turn off Penang road for Chulia Street, where you will find a great deal more budget hotels and guesthouses on Chulia and off the side roads like Love Lane and Muntri Street.

This is my number one point of entry to get to Penang Island and for someone who has never been to Penang before, the easiest way to get orientated.

Butterworth bus terminal is on the mainland, right next to the Butterworth to Penang Ferry (now the new Penang Sentral terminal building is open the ferry jetty is directly connected to the bus terminal on floor 2).

Once you are on the ferry, it is just 15 minutes to get to the Georgetown Jetty, where you have a choice of walking into town (most hotels / guesthouses can be reached in 10 minutes), catch one on the government "FREECAT" buses from in front of the bus station, or catch a Rapid Penang bus to anywhere else on the island from the bus station that is all around you, as you walk down from the ferry.

If you plan to stay out on the beach at Batu Ferringhi, you can catch bus 101 from here.

Another reason I like to get the bus to Penang, Butterworth bus station, is that you avoid the sometimes horrendous traffic on the island, that can mean spending up to an hour on the island before reaching KOMTAR.

There is also a lot more choice of buses going to / from Butterworth, with many of the cheaper bus companies operating to and from here, rather than onto Penang Island, where all the luxury buses all tend to end up. 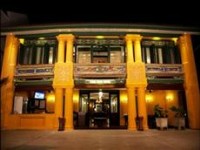 Find a place to stay in Penang >

How to get from Butterworth to Nibong Tebal >

How to get from Alor Setar to Penang >

How to get from Penang Sentral Butterworth to Kuala Perlis Jetty >

How to travel from Penang Sentral to Ipoh >

Getting from Penang to the Cameron Highlands >

How to travel from the Cameron Highlands to Penang >

How to get from Genting Highlands to Penang >

How to get from Penang to Kota Bharu >

How to travel from Melaka to Penang by bus, train flight or car >

How to get from Penang to Melaka >

Penang to the Perhentian Islands >

How to travel from Penang to Singapore by bus, train, flight or car >