You can travel from Penang Sentral, Butterworth to Taiping in Perak state, Malaysia by both train and bus/coach.

However, the train is by far the best option as the train station is located within a short walk of the town centre, while a bus to Taiping will take you to Kamunting (6 km from Taiping town centre).

To get to Taiping by train you have a choice of taking:

2) A faster but relatively expensive ETS train from Butterworth to Taiping.

This is the way we recommend you travel.

It is cheap (commuter train tickets cost just 7.50 RM to Taiping), only slightly slower than taking a direct ETS train (see below) and much quicker and cheaper than taking a bus.

To see all the KTM Komuter trains to Taiping see the following link: 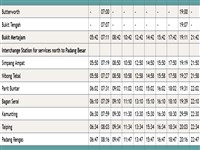 There is no need to make an advance booking for KTM Komuter trains to Taiping (unlike ETS trains).

Just turn up at Butterworth Railway Station and buy your ticket for the next departure from the ticket counter upstairs.

To find the best places to stay in Taiping click here >

ETS Train to Taiping from Butterworth

The fast ETS train is the quickest way to get to Taiping from Butterworth.

The duration of the journey by ETS train is a little under an hour but it will cost you at least 2 to 3 times as much as using the KTM Komuter services.

If you want to see the latest ETS schedule to Taiping, click on the following link: 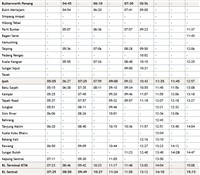 As there is no bus service that takes you from Butterworth to Taiping town centre we really wouldn't recommend you take a bus - the train is far more convenient.

However, if you do want to know how to travel by bus to Taiping, here is the route you should take.

These buses take around one and a half hours and cost between 13 - 15 RM.

From Kamunting bus station you will then have to take a local RapidKamuting bus to Taiping (costs 1 RM).

Taiping to Ipoh by train or bus >

Penang (Georgetown) to Taiping by train >