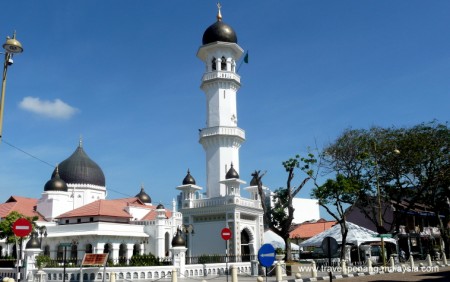 The Kapitan Keling Mosque in George Town Penang, is a good example of Indian Muslim architecture, with the original building dating back to the 19th century, when early Indian Muslim traders to the island, built the first small single storey brick mosque here.

Over the years the original mosque has been expanded many times into what is seen here today, the largest mosque in George Town Penang.

If you would like to visit the mosque, it is open to the public and non Muslims, although the worship hall is out of bounds to non Muslims.

Free guided tours are operated by the Islamic Propagation Society. If you are interested on taking one, just head for the minaret at the front of the building, where there is an information office.

All visitors are required to wear robes, which are supplied for you.

Admission Fee: Entrance to the grounds is Free.

Hard to miss, the mosque is located on the corner of Jalan Masjid Kapitan Keling (also known by its old name to older people, as Pitt Street) and Buckingham Street and is within walking distance to most accommodation in the old part of town.

If you are on Chulia Street, just walk down towards the ferry until you reach the traffic lights and the mosque is on the right hand side.

If you are coming from the beaches at Batu Ferringhi, catch RapidPenang bus 101 and get off along Chulia Street or the first stop in Little India. 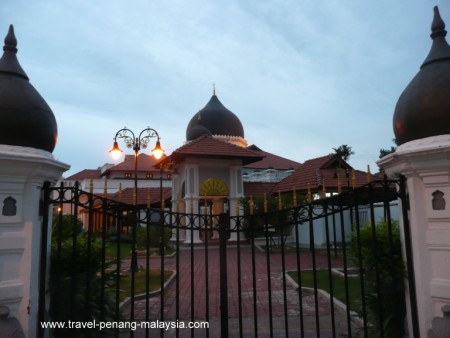 Photo of the Mosque taken from Chulia Street

Places to Stay near the Kapitan Keling Mosque

Being in the centre of the old part of George Town, there are dozens of places to stay within just a few minutes walk of the mosque.

The nearest hotel is the upmarket MiL Boutique Residence which is just across the road on Pitt Street to the right.

You will also find some more, mostly upmarket accommodation along Armenian Street, just a couple of minutes walk away.

For budget accommodation, Chulia Street and the surrounding lanes have plenty of options, or you can try the Little India area, which starts just a minutes walk away from the mosque.

More places of worship to visit in George Town and around Penang Island (just click on a picture or link for more information):

Back to the Temples main page