Travel from Padang Besar by KTM Komuter train (commuter) is a cheap way to get around the states of Perlis, Kedah, Penang and Perak in north-west Peninsular Malaysia, with regular Komuter Utara train services (Northern commuter) operating from this Thailand / Malaysia border railway station. 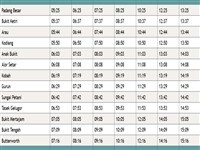 One way tickets on commuter trains to and from the border on the Padang Besar to Butterworth route (laluan) cost:

For connecting services for destinations further south in to Perak state, change trains at Bukit Mertajam Railway Station for the BM to Padang Rengas Komuter Line.

There is no need to buy two separate tickets, you just buy your ticket to your final destination.

To see the full Komuter train timetable for this route from BM to Pdg. Rengas click here >

Tickets for these trains are only sold on the day of travel.

No advance booking is available or required as seating is on a first come first served basis, and those without seats have to stand in the central aisle of the train (just like tube / subway trains)

If you are arriving at Padang Besar Railway Station from Thailand, you will need to bring some Malaysian Ringgit with you, as the money changer at the station has closed down.

The KTM Ticket Counter / Office at Padang Besar station is located upstairs next to the departures waiting area / cafe.

If you are stuck without any RM, you can try asking at the cafe upstairs as they accept both Thai Baht and Malaysian currency for purchases.

The nearest banks / money changer / ATM is in town, about a 15 to 20 minutes return walk.