Taking the fast ETS Train from KL to Penang Sentral (Butterworth) is now the quickest way to travel from Kuala Lumpur to Georgetown on Penang Island (reached by a 15 minute ferry ride) and one of the most popular ways to travel to Pulau Pinang.

You can also take any of the trains shown in the timetable below from the old Moorish Kuala Lumpur Railway Station - Terminal KTM.

Trains depart the old Kuala Lumpur station for Butterworth about five to six minutes later than the departures times shown from KL Sentral below.

The duration of the rail trip from KL to Butterworth by train is approximately 4 hours and 10 - 15 minutes for the fastest Platinum services, slightly slower (another 10 - 15 minutes) for the Gold services which stop more frequently along the route. 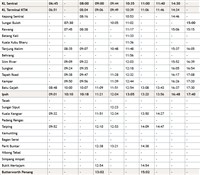 The above rail services from Kuala Lumpur to Butterworth, Penang Sentral have a varying amount of stops along the route.

To help in your choice of trains, you may want to take a look at the latest full ETS timetable.

EG Numbered Trains are ETS Gold Services (the cheaper of the two options).

To book tickets for these ETS services click here > 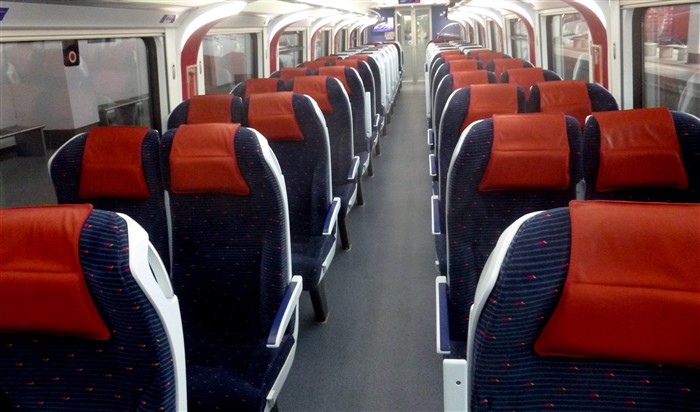 Seats on an ETS train from KL to Penang

If you want to check the latest timetables directly from the KTM Malaysia Railways official website:

You can visit the KTM website ETS page here >

Looking for somewhere new to stay in Penang?

See our list of the latest hotel openings in Penang here >

For more information and the latest departure times for the ferry click on the picture link below:

How to get to KL Sentral Railway Station

KL Sentral Station (KLS) is located in the heart of Kuala Lumpur city centre and is one of the best connected places in the city, with a wide variety of transport options.

Depending on where you are staying in KL city centre, usually, the best way to get to KLS is by one of the varieties of different train types that are connected to KL's main transport hub (as these miss out on the sometimes horrendous traffic you may encounter if you travel by bus or taxi).

There are train connections by:

If you are planning to travel from KLIA to Penang Island, by far the best and quickest way to travel from the airport is to take the really fast ERL KLIA Express trains from KLIA2 / KLIA to KLS.

It is not the cheapest train in Malaysia costing around RM 55, but it only takes 28 minutes to get from the airport to KLS.

There are also much cheaper, but much slower buses that run from the KUL airport to KLS if you are travelling on a budget that cost only RM 10 (we would not recommend the bus if you have a tight connection to catch your train as the traffic in the city centre can delay you quite a while sometimes)

If you are flying into Subang Airport in Kuala Lumpur (SZB) and want to travel to KL Sentral to catch an ETS train, the best way to get there is to take one of the regular and cheap KTM Skypark Link trains from SZB to KL Sentral.

The Skypark Link trains take only 30 minutes to get to KLS and costs just RM 11 per ticket.

Once you arrive at Butterworth Station you will find onward travel connections within just a few minutes walk from the station exit.

The Butterworth bus station is now located on the lower floors of the recently opened Penang Sentral Terminal building.

The entrance to the ferry terminal for boats over to Georgetown is also now located in the Penang Sentral building on the second floor.

Building work is still being carried out around Penang Sentral, so once you arrive at Butterworth Train Station, just follow the signs to where you want to go from the station exit (it only takes a couple of minutes to walk to Penang Sentral).

For more information see our:

Ticket Prices for the ETS Train from Kuala Lumpur to Penang

The basic fare for the ETS train from KL Sentral to Penang, Butterworth cost:

There is also a new more expensive business class coach operating on some of the newer ETS2 trains.

Please note: For departures from the 1st of March 2020, KTMB has introduced a new "Flex Fare" (Tambang Fleksi) for ETS trains in Malaysia.

Using these flexi tickets, you will be able to get a slight discount on the fares shown above if you book your tickets over 30 days in advance.

However, Flexi tickets will now cost you more if you book 6 days or less in advance.

There are also many more variables to the Flexi Fare system that can push the price up (like travelling during peak holiday periods which is now more expensive).

The only way to find the actual ticket price you will pay to travel from KLS to Penang by train on any given day would be to go through the online booking process.

Prices for the train from the old Kuala Lumpur Railway Station (Terminal KTM) to Butterworth cost the same as tickets from KL Sentral Railway Station. 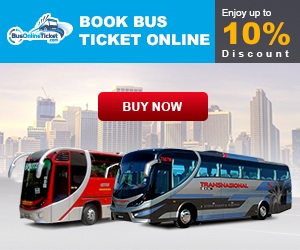 Buying Tickets for the ETS Train KL to Penang

Buying tickets from KL Sentral KTM ETS ticket counter can be a quite time consuming process and is often very busy during the day.

A much easier solution is to book your KL to Penang train tickets online.

Tickets prices are the same as the counter price if you use the KTMB website.

Booking online also saves you the trouble of having to visit the station days or weeks before your departure date to buy your tickets.

Advance booking periods can vary from just a few weeks ahead, to over 3 months ahead (depending on when KTM plan to change the ETS schedule, which they do a number of times a year at the moment).

Where to Stay in Penang

The best places to stay for visitors who want to visit the tourist sights are in the old Heritage zone of Georgetown city as staying here gives you easy access by foot to all the tourist attractions.

Another popular place to stay is out on the beaches at Batu Ferringhi where you will find many international style beach resort hotels as well as cheaper budget accommodation located a little further back from the beach.

Please see the following pages on our site for more information:

If you want to find a place to stay in near Butterworth Train Station on the mainland there are far fewer options and most of those involve a fairly long walk or taxi ride to get to:

How to get from KL Sentral to Penang Island >

More ways to travel from Kuala Lumpur to Penang >

How to travel from Kuala Lumpur to Georgetown >

Buses from KL to Butterworth >